In the opening decades of the twentieth century the excavation of cave sites in South Africa was carried out by a range of licit and illicit operators. Some, like John Goodwin and his student Berrie Malan, regarded themselves as professional prehistorians. Others, like Peter van Riet Lowe, came to the discipline of archaeology via other careers. Still others – enthusiasts, amateurs, semi-official excavators, and "avocational archaeologists" to use the current phrase – operated on the fringes of official regard and scientific recognition.

Peers Cave – also known as Skildergat – is a large and imposing cave site situated on a south-facing koppie above the Fish Hoek valley, due south of the city of Cape Town. It is the most obviously promising archaeological site in the chain of mountains that forms the Cape peninsula. At the time of its excavation it had an exceptionally deep deposit. It also contained the only rock paintings to be found in a roughly one-hundred-kilometer radius (and the most southerly rock paintings on the continent of Africa). Its south-facing aspect protects the cave from the northwesterly winds that bring the Cape's winter rain. It commands an imposing view of the valley, the wetlands, and the ocean on either hand.

The party from the combined meeting of the British and South African Associations for the Advancement of Science climbs to Peers Cave. In his introduction to the Guide to Peers Cave, MR Drennan writes: "It is to the home of these primitive people as to a Mecca that we are now being led. Surely it is worth a climb to see this monument to natural beauty and to human pre-history…" (1941:6). BC 290/104

Victor Stanley Peers (1874-1940), a railway worker, and his son Bertie (1903-1939), lived in the Fish Hoek valley. They had a number of enthusiasms including archaeology, palaeontology, and in Bertie's case, collecting snakes. Janette Deacon and Mike Wilson report that Goodwin, who had dug a trench in the cave in 1925 (Goodwin 1929), met the Peers father and son and encouraged them to continue with this work (Deacon and Wilson 1992). The Peers excavated the cave between 1927 and 1929, working on weekends, public holidays and during their annual week of leave. They used spades, picks, and dynamite to shift the larger boulders (the marks of the explosions are still visible on the walls). In the upper levels they found a shell midden, up to 1.5 metres thick, dating to the Later Stone Age. The remains of six persons, two nearly complete female skeletons and four children, were found buried in this layer, "tucked into cavities in the rear wall" (Deacon and Wilson 1992:3). They were buried with marine-shell pendants, ostrich-eggshell beads, bone awls, arrow points, bored stones, and in one case, a small leather bag filled with herbs. Two more skeletons were found in the Stillbay (Middle Stone Age) deposits below the shell midden, but were judged to have been buried from the midden level.

A ninth skeleton was recovered from the deposit below the Stillbay layer (layer 3). This individual was described by Sir Arthur Keith, the British anatomist, as a male, about 30 years old, and 1.57 metres tall. The remains immediately achieved celebrity as the "Fish Hoek Man". His fame depended on his having been associated with the Middle Stone Age layer, at a time when human remains from the MSA were extremely rare. Interest in this find was so great that when visiting archaeologists attending the joint meeting of the British and South African Associations for the Advancement of Science arrived in Cape Town, they "went direct from the mail steamer to the cave before going anywhere else" (Deacon and Wilson 1992:2). On the cover of a booklet on Peers Cave issued by the Fish Hoek Municipality in 1941, Sir Arthur Keith is reported to have said: "It will be a long time before so perfect a discovery as that made by the Peers is repeated". At the Durban Meeting of the South African Association for the Advancement of Science in 1932, JC Smuts declared: "The exploration of the cave is not yet complete, but already it promises to be the most remarkable cave site yet found in South Africa" (Jager 1941:9)

What are the terms of our engagement with a site like Peers Cave, might be one of the questions that we ask in the wake of the site's destruction. Do we think of it as a place of discoveries and secrets? And are these secrets best pried loose with dynamite and shovels? Or are there other ways of knowing, other regimes of care that come into operation?

The Peers stopped work in 1929 at a depth of 3 metres. They put a trench into the talus deposits at the mouth of the cave that reached an estimated 6 metres, and recovered Early Stone Age artefacts. At the time, the only other cave with a full sequence from Early to Later Stone Age was Montagu Cave, 160 kilometres to the northeast. The Peers' methods were haphazard, and the progress of their excavation was poorly documented. They kept only representative samples of the stone implements from each layer, and these became mixed with finds from other sites. The vast majority of the stone implements – likely numbering in the tens of thousands – and almost all the non-human bone, were tipped down the talus slope, where they lie to this day. Bertie Peers died in 1939 of a snakebite, and Victor died the following year. Keith Jolley, a student of Goodwin's, undertook further work at the cave between 1946 and 1947; however he "was unable to finish the work satisfactorily" (Deacon and Wilson 1992: 3). In 1963 an American doctoral student, Barbara Anthony, carried out further excavations, but her work was also never completed or fully published. Following Anthony's excavation, bone from the postcranial skeleton of Fish Hoek Man was dated to about 12000 BP, placing it well within the Later Stone Age, "and showing the great antiquity earlier claimed for it to have been incorrect" (Deacon and Wilson 1992:3). Tom Volman, then a PhD candidate at the University of Chicago, studied the artefacts from the three sets of excavations. He concluded that a reliable culture-stratigraphic sequence for the upper levels could not be established from the reports of the Peers and Jolly. Deacon and Wilson title their short account of Peers Cave "The Cave the World Forgot", referencing a history of sloppy excavation and incomplete publication.

There used to be an idealised diorama of Peers Cave in the South African Museum, showing two San/Bushman hunter/gatherers looking out over the lush valley. Visiting Peers Cave today is a depressing exercise. The walls of the cave are graffitied and smoke blackened. [view image gallery] The rock paintings have disappeared. A line painted around the circumference of the cave shows the height of the deposit before the Peers began excavating. It runs well above our heads. The slopes of the koppie, which would have been covered in fynbos in the 1920s, are choked with invasive Port Jackson willow. Tangled among the roots of the alien vegetation, eroding down the slope of the hill, the majority of the contents of the cave lie in disarray. The dead of Peers Cave lie in cardboard boxes in the archaeological collection of the South African Museum where they are little studied. Rock climbers use the surrounding rock face and the cave itself, but a recent advisory from ClimbZA reports the "unofficial closure of Peers Cave" following attacks on climbers. African Independent Church groups use the cave and its surrounds for their ceremonies. Fish Hoek's satanists, much alluded to in the contemporary lore of the town, reportedly use the cave for their dark arcana.

The status of Victor and Bertie Peers needs further comment. They were fringe actors in a discipline under formation, but they also throw a revealing light on archaeology itself. It is interesting that Goodwin, who arrived at the University of Cape Town in 1923 to take up a post in archaeology and ethnology, should not have taken up the task of excavation. He was in correspondence with the Peers, and offered to have casts made of the skull of Fish Hoek Man (which the Peers planned to sell). He also offered to redraw the Peers plans of the excavation, which were regarded as being too exuberant for scientific publication. These plans, together with drawings of some of the smaller shelters in Kalk Bay, are among the most beautiful artefacts to come from the archive of the excavation of Peers Cave. They speak (in spite of themselves) of the always unstable frontier where empirical enquiry shades into something else (fascination, empathy, obsession). They also speak of the pathos of death, the intimacy of the grave, and the disruptive nature of the act of exhumation.

"While Bertie was proud as punch about his skeletons, the neighbours shuddered at the ghoulish figures, and the strange pets that this young man was forever bringing home."

Peers Cave occupies an unstable place in a local tradition of archaeology and Stone Age studies. It was probably occupied on and off for the last 200 000 years. Prior to its excavation it existed as a living site, a sacred site, and a site of ancestral burial. It also existed as an unparalleled archive of life on the southern peninsula, but an archive whose meaning and unfolding are not readily apparent. What are the terms of our engagement with a site like Peers Cave, might be one of the questions that we ask in the wake of the site's destruction. Do we think of it as a place of discoveries and secrets? And are these secrets best pried loose with dynamite and shovels? Or are there other ways of knowing, other regimes of care that come into operation? What has been lost (a great deal, obviously), and what has been gained? 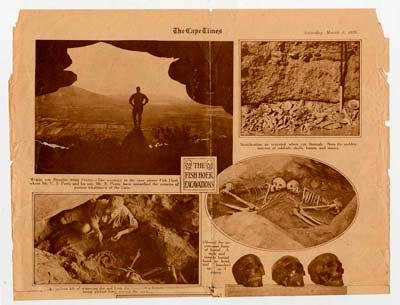 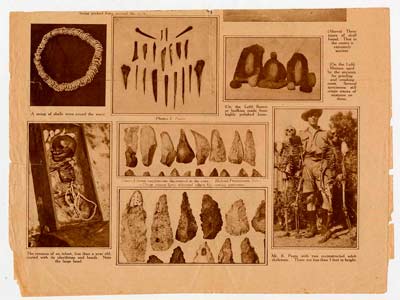 I have been suggesting that Peers Cave exists as a kind of absent presence. What we encounter is the empty, ruined container of a site. It tells us almost nothing about life in the past. What it does tell us something about is the discipline of archaeology, and the nature of society in the valley in the period of its excavation. Fish Hoek was laid out as a township in 1918. With its radial street plan, its proximity to the ocean, and its rail link to the city centre, it promoted itself to a growing white middle class as a model town on the urban periphery. Perhaps the most salient feature of the site is that it should have lived so powerfully in the mythos of the town that it overlooks, and that this mythos should have been based on a misapprehension (the false attribution of Fish Hoek Man to the Middle Stone Age). Two images by way of conclusion: the first was published in a supplement to the Cape Times of March 3, 1928, on "The Fish Hoek Excavations", and reprinted in The Story of Peers Cave with the caption: "While Bertie was proud as punch about his skeletons, the neighbours shuddered at the ghoulish figures, and the strange pets that this young man was forever bringing home" (1978: 14).

Bertie has his arms draped around two of the skeletons from Peers Cave. The three face the camera, the living man and the dead but rearticulated skeletons, brought back into the world of the present through their exhumation, through the figure of "Fish Hoek Man", and through the symmetry of their poses. In a second image Victor's daughter Dulcie, who was eleven when they started digging Peers Cave, shakes hands with one of the skeletons. The gag here is about how short the adult hunter/gatherer is (Dulcie in her bobby socks and party dress towers over him). What a strange fate to have overtaken the dead of Peers Cave. The lessons here are all in one direction. We send up our voices to the cave on the hill; in the answering echo we hear only ourselves. 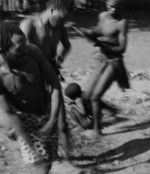 next: What Mr Goodwin saw at the showgrounds

previous: Picnic in a cave