In 1927 the South African archaeologist John Goodwin took his Cambridge mentor, Miles Burkitt, on an ambitious road trip around southern Africa. Accompanied by their wives, Goodwin and Burkitt covered some 7000 miles through South Africa and Southern Rhodesia (Zimbabwe). Burkitt was Lecturer in Prehistory at Cambridge, and Goodwin had been his pupil before taking up a position in South Africa. Burkitt's visit was at the invitation of the University of Cape Town. Its purpose was to show him the southern African sites and to elicit his opinion ahead of a meeting of the British Association in South Africa. This trip has since passed into the local lore of the discipline. Janette Deacon (1990) describes it in her account of the development of southern African Stone Age studies. She also reproduces a photograph, the original of which is in the Goodwin Collection, alongside the following caption: "From left: Miles C. Burkitt, Mrs Peggy Burkitt, Mrs Winnie Goodwin and A.J.H. Goodwin at a cave near Tarkastad, Eastern Cape, in 1927" (a139).

We see Burkitt leaning back to show the tracing that the women are working on. His spectacles reflect discs of light at the camera, and he cuts a slightly alarming figure with his offbeat pose. The women wear coats and sensible shoes. They offer sidelong smiles to the camera. Goodwin, who would have been the host in this scene, showing the older man one of his sites, looks dapper and composed. He and Winnie Goodwin have both unconsciously crossed a leg, so that their poses create a kind of connection between them. We see a small group arranged around a task; the group members are all waiting for the camera, and each has responded in his or her own way. A good deal of the strangeness and the charm of the image results from the clothing that the figures wear. They seem overdressed, as though transported from an altogether more genteel setting to the rough countryside of the Eastern Cape. Their clothing creates a sense of distance from the present. It speaks of an alien social milieu, a kind of colonial fortitude. I am reminded of the stories told about Robert Broom who would appear on site at Sterkfontein in an old-fashioned butterfly collar.

Two important publications came out of this trip. Burkitt announced at the conclusion of the tour that he would produce a book on southern African prehistory. Goodwin, who for some years had been working on a book of his own, was goaded into a frenzied collaboration with his "correspondence pupil", Peter van Riet Lowe. It became a kind of race between between Goodwin and Burkitt. Whoever won would have produced the first comprehensive book on the subject. Burkitt got in first with South Africa's Past in Stone and Paint (1928). The story goes that he completed the manuscript on the boat home. Goodwin and van Riet Lowe's The Stone Age Cultures of South Africa was published the following year. Both works, but particularly Goodwin and van Riet Lowe's more empirical study, have been recognised as definitive texts in their field.

In fact, if one were to pick a moment of inception of a sustained local project of prehistory, this may well be it (Shepherd 2002). Many of what would become defining elements of the discipline are present. There is the sense of rivalry between centre and periphery, and the ambiguous position of the local practitioner. The trip itself was significant as an exercise in physically constituting the field of practice in southern Africa as a network of sites. We think of the ritual of visitation, the formal act of recognition involved in singling out and naming rock shelters and open sites, and the kinds of practices that they elicit (mapping, tracing, collecting, photographing). Not least is the sense of ambition manifested by the scale of the trip, the desire for overview. The grand tour of Goodwin and Burkitt was a way of engaging landscape in a tradition of colonial travellers to the interior, but it was also a way of constituting a geography of the imagination that was to be crucial to the emergent discipline of archaeology. Burkitt would later recall his visit to the cave in a terse sentence: "Near Tarkastad we noted some delightful paintings…" (Burkitt 1928:42)

Burkitt argues in his book for Northern, and more specifically for European Lower Palaeolithic, Mousterian and Upper Palaeolithic, influences in the stone-tool assemblages and rock art of southern Africa. Interestingly, Goodwin and van Riet Lowe repeat this view, even as they were doing so much to unshackle the South African sequence from European typologies. They argue that many of the local stone-tool industries came to southern Africa with the migration of people from North Africa, a part of the world that had been touched by civilisation by virtue of its proximity to Europe. The Sahara acted as a selective barrier, preventing the movement of cultures from south to north, but allowing "higher" cultures to pass from Europe to south of the Sahara. In their words, Africa is "a pocket from which nothing tangible returns" (Goodwin and van Riet Lowe 1929:3). The image here is of a cul-de-sac or cultural black hole, something that absorbs energy and creativity and returns nothing. This geography of the imagination is given expression elsewhere in Goodwin's work. An essay on "The Peopling of Africa" begins as follows: "Sitting here in Cape Town, or perhaps now and then travelling to Europe in a great curve which passes round the western coast of our continent, we seldom think of the vast numbers of people who live, and go about their daily work, and die, between us and Europe" (Goodwin 1935:1). A colonial notion of centre and periphery, so present in the practice of the discipline, is doubled in an image of prehistory. Central to both is the production of a notion of Europe in relation to a notion of Africa. "Europe" is a site of innovation, also a site from which disciplinary knowledge proceeds. "Africa" is an evolutionary cul-de-sac, a dark intervening space.

A number of photographs survive of the Grand Tour of Goodwin and Burkitt, in addition to the scene in the cave near Tarkastad. The visiting party inspects the ruins of Great Zimbabwe, looks at rock-art sites, and poses at Rhodes's grave. In several of the images Goodwin and Burkitt have positioned their wives in the frame to give a sense of scale. 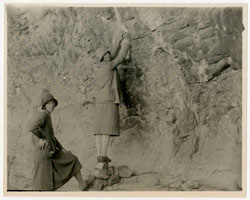 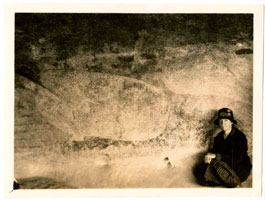 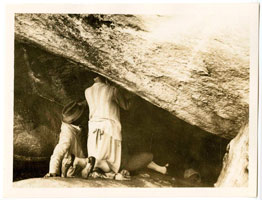 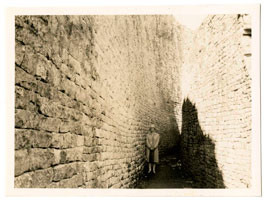 "Parallel Passage, Zimbabwe Temple". BC290/103
The book can now be purchased at jonathanball.co.za

next: Cleaning up the Stone Ages