Picnic in a cave

The roots of archaeology's engagement with its own constituency go back at least as far as Goodwin's "Sermons in Stone" (1926). However, it was not until August 1944 that the Cape Archaeological Society was founded by a small group including Goodwin and Dorothea Bleek. The initial aims of the society were modest. It was hoped that a minimum membership of thirty would enable it to function, and it confined its activities to the Cape province. The nature of the response was such that, at the intervention of Smuts and van Riet Lowe, the scope of the society was widened. In June 1945 the South African Archaeological Society was founded, covering "southern Africa, including Southern Rhodesia and those neighbouring territories which have a lively interest in the subject" (Malan 1956). Goodwin and AW Robinson drafted the statutes of the society, which provided for a central council with autonomous centres wherever they could be maintained. Within nine months the society had 247 members and sixty "junior associates". Six centres had been organised, of which the Cape peninsula and the Witwatersrand were the largest.

An important part of the Society's activities lay in the area of publishing. At the end of 1945 the first issue of the Southern African Archaeological Bulletin appeared, with Goodwin as editor. Initially the Society hoped for three numbers per year, but within a year it had become a regular quarterly journal. It was for many years the only regular archaeology journal south of the Sahara, and remains the only indigenous archaeology journal with a continuous record of publication (Deacon 1990). The first ten volumes of the Bulletin contain 113 full-length articles, and 109 shorter articles. The list of topics (surveyed by Malan in his address as president of the Society in 1955) covers work on ape, proto-human and human skeletal remains; work on the Earlier and Middle Stone Ages; a substantial number of contributions on the Later Stone Age; and a smaller number of papers on what was termed "proto-history" and would later become the "Iron Age" (including work at Great Zimbabwe and Mapungubwe Hill). In addition to the Bulletin the Society published a series of handbooks intended to be "guides to new members who require access to the basic data of our subject", as well as works of reference "for the research worker" (Malan 1956: 32). The first of these, Method in Prehistory (Goodwin 1945), is a textbook on archaeological methodology, with sections on "Field Research", "Excavation", "Beliefs and Burials" and "Primitive Arts and Crafts". The Loom of Prehistory (Goodwin 1946), the second handbook, was intended to update The Stone Age Cultures of South Africa.

It is common around this time to find references in the archaeological literature to "the needs of the common man" and "the need to involve the man in the street", but in the period 1923–1953 archaeology in southern Africa was entirely and exclusively a phenomenon of settler society.1 This may seem less surprising than it is. It was, after all, a period in which any number of amateur scientific and other organisations sprang-up in the colonies, with a membership that was white, or largely white. What makes it remarkable in this case is that archaeology as a discipline is so centrally about black African experience. This brings us to a defining paradox of colonialist archaeology, which was that it was possible – in fact, it was entirely normal – to practice African archaeology without knowing, or wanting to know, anything about African people per se. In fact, in a broadly metaphorical but also in the most literal way, doing archaeology involved looking through the landscapes of the present, with their clutter of political aspiration and social change, to find the traces of an imagined past lying below. 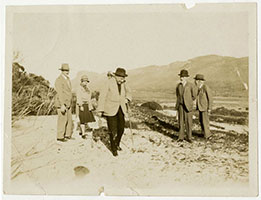 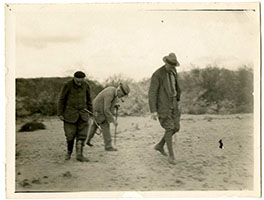 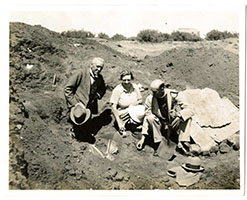 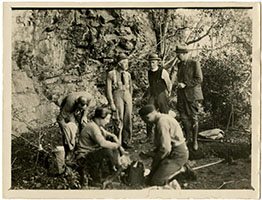 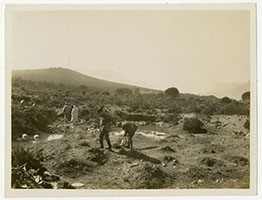 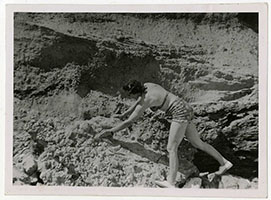 "Fallen block of sandstone at Overstrand in which "pick" was found". From a letter sent to Goodwin. The figure in the bikini points to the stone pick. BC290/39 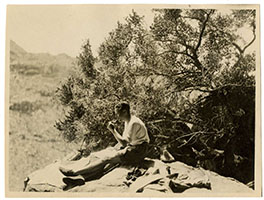 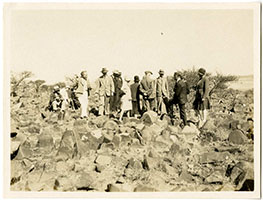 This indifference towards the African present was combined with an intense curiosity about the material relics of the archaeological past. Such a curiosity extended well beyond the confines of the discipline, with its handful of professional practitioners, to include a significant amateur constituency. Early issues of the Bulletin are filled with accounts of amateur excursions to archaeological sites. The issue of September 1948 carries an account by A Stamelman of "[a] short archaeological excursion down the valley of the Lower Vaal". This begins as follows: "Being in need of a break from office routine Mr. L. Rosenberg and the writer decided to spend the Christmas weekend in a leisurely trip by motor-car down the Vaal River as far as Douglas, stopping at all likely looking water courses, dongas and eroded areas near our road, and investigating for possible traces of early man" (71). Outside Douglas they strike "payable deposit". They enlist the aid of "a chattering of piccannins" by promising sixpence for every hand-axe found. At Mazelsfontein they encounter Mr Sopper, "an enthusiastic collector". They write: "In the country districts, many farmers and storekeepers of an inquiring turn of mind take a keen interest in the abundant traces of man's early past lying about" (72). They journey to Riet River, to the home of "Mr. Celliers, another collector"; and so it continues.

"The younger and more energetic members of the Society dug into virgin ground and brought to light artefacts made, as the Abbé Breuil remarked to Mr Harcus, ‘6000 to 60 000 years BC'"

Members of the Archaeological Society attended illustrated talks at the various regional centres, and took part in guided excursions to nearby sites to trace rock art, collect surface specimens, picnic, and conduct informal "digs". In the issue of December 1948 (for example) the Witwatersrand Centre reports: "On Sunday, 12th September, 1948, 70 members visited the Hoernle Donga under the guidance of Professor van Riet Lowe". On arrival they heard a talk: "Members then set out in search of specimens. Large numbers were found, Mr. MDW Jeffreys having the greatest luck. He recovered some good hand-axes from the gravels and two outstanding Middle Stone Age points from the ferruginised level...Members reassembled with their finds before luncheon to listen to a further explanatory talk". The same issue reports: "The visit to Mr John Harcus' site on Plot 174 Primrose Hill on 14th November was, as usual, very successful. The younger and more energetic members of the Society dug into virgin ground and brought to light artefacts made, as the Abbé Breuil remarked to Mr Harcus, ‘6000 to 60 000 years BC'" (SAAB 1948: 3-4).

In the issue of December 1949, the Northern Transvaal Centre reports: "A Sunday excursion earlier in the year to the Makapan Caves was attended by forty members and friends". The Witwatersrand Centre reports: "On April 24th, 1949, an excursion was made to the newly found Early Stone Age site as Zwartspruit, near Pretoria, on Dr J Liebman's farm, Silversands" (SAAB 1949: 133). The issue of September 1952 reports a joint excursion by members of the Witwatersrand and Northern Transvaal Centres to Makapan Caves, "remarkable…for deposits containing Man-like Apes, Chelles-Acheul material and implements of the Pietersburg Culture". It continues: "It is worthy of note that the round trip meant a total drive of some 500 miles, including excursions, and meant very considerable organization and co-operation between members". The same issue announces a forthcoming joint excursion to Ladybrand Caves: "Perhaps the most ambitious project so far discussed by any Archaeological Society in the world…The total distance must be in the order of 600 miles for the round trip, and very varied country will be encountered…" (SAAB 1952: 107). And so it continues, with almost every issue of the Bulletin giving details of excursions, talks, slide-shows and film screenings in a programme that covered centres in South Africa and the then Southern Rhodesia.

The excursions and activities of the Archaeological Society were a way of engaging landscape, but they also formed the basis for a complex claim to territory. In White Writing, JM Coetzee (1988) writes of a tradition of settler poetry in South Africa in which the poet seeks to establish a reciprocity with landscape, finding a formulation of words to fit the land and speak its soul. In a recurring, and ultimately self-defeating, image, the lone poet stands in empty space declaiming words, waiting for an answering echo. For its professional and amateur savants, the discipline of archaeology offered a way of reading landscape, deciphering the "hidden histories" written in the language of stone and bone. More than simply a claim to knowledge, such excursions were a way of constructing a habitus, a connection or reciprocity with a landscape experienced as alien, even threatening. With archaeology one encountered the past as embodied experience. In the materiality of sites and remains, one could see, touch, small, even taste the past and - as it were - dwell poetically in the time of the Man-Apes of Makapan Caves and the Cultures of the Later Stone Age. That these were Other histories, in contemporary contested landscapes, was both the point of contradiction and the point of purchase of these claims.

"Skildergat 18/7/1929". With note: "These pictures possibly taken by someone else and sent to Goodwin, not his writing on back" (Ione Rudner, 7/3/1979). The Abbe Breuil sits on the fender, Goodwin has his hand on the mudguard, Mrs Harper Kelley to the left in the overcoat. BC290/104

One of the most frequently encountered category of photographs in the Goodwin Collection shows excursions to archaeological sites on the part of Goodwin, his professional colleagues, and the amateur members of the Archaeological Society. They speak of the high seriousness of the archaeological endeavour, and of an intense, almost lyrical engagement with landscape. We have the sense of a band of insiders, forging a new language, engaged in reimagining the South African landscape as a linked network of sites. 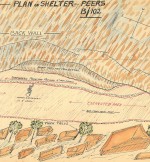 next: Remembering and forgetting Peers Cave